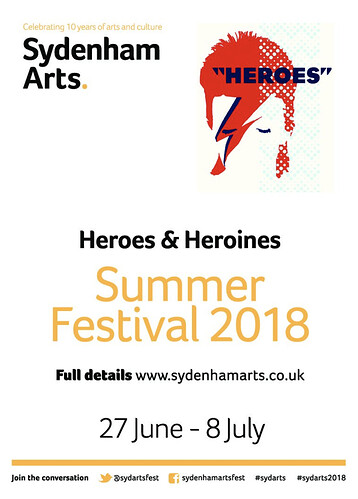 Our festival theme this year is Heroes & Heroines and we bring you another 10 day multi-arts programme with some great talent. The Artist Trail runs over both weekends with over 100 artists exhibiting in 30 locations. Paintings, prints, ceramics, glass, jewellery and sculpture.

Opening with Exploding Whale’s compelling theatre production, Heroes; a story of friendship, growing up and loneliness. Set to Bowie’s, The Rise & Fall of Ziggy Stardust & The Spiders from Mars, the humdrum lives of Joe & Billie are changed forever after witnessing Bowing performing ‘Starman’ for the first time on ‘Top of the Pops’ determined to go to Bowie’s upcoming London gig, the friends leave home on what becomes a journey of self-discovery where the lines between hero worship and friends become blurred.

Written by Bebe Barry & Tony Barry, directed by Max Harrison this exciting piece of theatre performed at Edinburgh Festival in 2017, hits Brighton Fringe and opens here Upstairs at the Sydenham Centre on 27 June and runs for 5 nights.

There’s more – we are hugely excited to be joining forces with comedy newcomers, The Poodle Club who have been bringing some exceptional talent to audiences in their fabulous home on Sydenham Road. They are with us here at the Sydenham Centre for one night only and bringing us 6 comedy greats, Arthur Smith, Ben Norris, David Mills, Arielle Souman, local lad Toussaint Douglas and Grainne Maguire.

Did someone mention films? We have collaborations with TNG & Sydenham Film Club screening Matilda and Three Billboards Outside Ebbing, Missouri. Then hop on over to Mayow Park for some live music on the bowling green with us supporting Perry Vale’s, Lark in the Park, followed by the return of locals, Rosie & Ben Fox with their live band set up for family festive fun, Foxtots Bops.

Plus we have our regular commitment of dance and music from local dancer, Amanda Botterill teaching us some Cha, Cha and Samba with solo guitar performances from the exquisite, Alex Hart.

Throw in performances by Bristol City Poet 2018 – 2020, Vanessa Kisuule, singer songwriter, Jill Jackson at the very intimate setting, St Bartholomew’s Church. On our last night don’t miss award-winning duo, Witt n Camp for musical, comedy and cabaret SWAG. It’s a magical line up. So book your time off, dive on in and see you there.