Improving shopfronts on the high street

Continuing the discussion from The Mural Designs!:

SE26 High Street is lined with very attractive buildings. There are some great shops too, the shop signage though is not great in many cases.
There could easily be an exciting, cost effective project to help improve shop signage plus to attractively advertise empty spaces. Example: 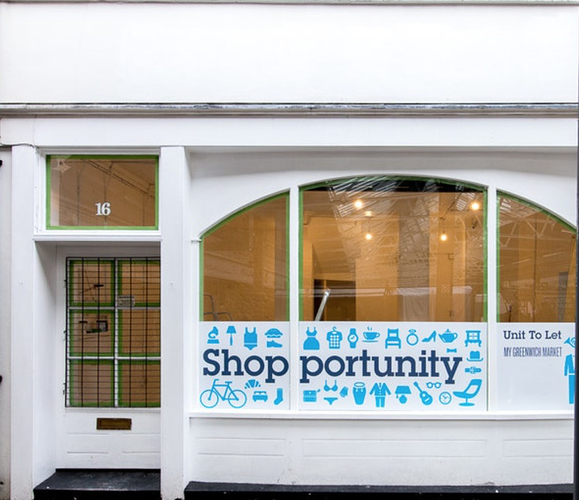 I’m with you on this. Looking upwards, the buildings on the high street are really quite beautiful.

But, travelling east of Kirkdale, the view at street level is a hotch potch.

What can be done, if anything should be done?

How about some minimum standards for shopfront cleanliness and aesthetics? Difficult to enforce, obviously, as what’s “pleasing to the eye” varies wildly from person to person.

I’m sure many would agree on other policies though, like a ban on betting shops?

This has been suggested many times in “the other place” for some reason it never gets off the ground and people allege that the shopkeepers are not up for it. I don’t think there is any point in speculating unless the shopkeepers are involved and in fact are in the driving seat.
To be fair, our “high street” is no worse than many many others in the UK- it is as it is and a lot of the shopkeepers do make an effort - it is only when you get past the junction with Mayow Road that Sydenham Road becomes a complete eyesore. . For example, I think Brockley is much worse but everyone goes on about the four or so gentrified shops with Victorian frontage like they represent the whole place. Also, if the bookmakers and let’s say the estate agents were to move out, who would move in?

As a shop owner myself, a lot could come down to cash flow and time.

I can’t imagine for one moment that a shop owner would be be against improving their window displays, fascia signage and overall appearance.

But when they are struggling to pay the rent and avoid a loss, working long hours to do so too, the seemingly obvious can get missed.

Instead of a mural for example, SE26 could crowd fund to improve the ‘tired’ operating shops. It would not cost much.

The estate agents advertising empty commercial / retail property should also be involved. Rather than billboards, the example I posted already, above in Greenwich.

This could be a relatively quick project, cost efficient project.

We create a narrative, it’s community led to improve our own high street, the shopping experience … and we seek some PR through doing this.

So concentrating on, optimising what we have already, subsequently attracting new independent retailers, improve quality local footfall and become a place to visit, shop for those further afield.

Perhaps a mural could be the way to go, but the overall approach needs to be more strategic.

That’s an interesting idea. Certainly a mural and a crowdfunded “improve our high st” effort are both possible and not mutually exclusive.

In fact, a great success in the mural crowdfunder could encourage a subsequent crowdfunder to improve the high street.

Regarding residents funding shop improvements - is there a risk of moral hazard here? Obviously we’d focus our efforts on improving the grottiest shops, but this is, effectively, a reward for negligence, taking the responsibility away from the shop owners themselves.

This is what I’m trying to say, add light on, it is not always about ‘negligence’ by the shop owners.

They have priorities, which feel immediate to create sales to pay bills. It is far too easy for us to for example say think more long term: improve your shop frontage, display etc and sales will increase.

In my view: this has to be a more strategic, all encompassing view, instead of starting with a mural. That’s just the dressing!

There maybe grants available to help?

This reminds me a bit of the Sydenham What If website where shop fronts and alternatives were discussed.

Just to say I have nothing to do with website or company behind it. Sure again some people will like designs and others not. Thought it has some good simple ideas. Aware few years old.

Certainly much can be done but comes down to money. Worth looking into grants idea @Joanne.
As well as money need time. Another rare commodity.
At present I am keen to support the mural project, not going to discuss pros and cons here as will go off topic. However in future certainly willing to give up time for any worthwhile projects which people identify and work on. Even if it means cleaning a wall in the snow, although hoping summer now starting. But with a few people and a couple of hours on the weekend much can be achieved. Providing someone takes charge and leads relevant project whilst engaging with wider community. This will always be the biggest stumbling block.

Hi Scg,
I was behind the What If Project (and others in Ilfracombe and Penge if you want, google them). I stopped it locally a few years ago. After trying to engage with various local shops, only Billings really embraced the scheme, and we did it for free and they needed the sign anyway as they were opening up a new shop.

I’ve worked on many shop schemes across London for over 14 different boroughs and been an advisor to the Mayor of London. These schemes are difficult, long and often expensive. Shop owners can be difficult to work with.

I’ve discussed this with Joanne on the other forum before. If you have a lovely shop front in a good state of repair, all nicely painted like many in Dulwich, and apply vinyls to the sign, then it can be cheap. But this is almost never the case.

It’s almost impossible to engage with brands and get them to change anything.

The mural project is a good one and I support it, although I have some reservations to how some will work with the indents in the wall as it’s not a flat surface. I’ve always liked ghost signs and murals and have designed quite a few. I know Joanne isn’t a fan of the Kirkdale ones I designed, but they were performing a function, seemed to be well liked and are based on the type on the Kirkdale Buildings. They are in the best positions we could get permission for, which as a task in itself.

Jon has done a brilliant job so far and anything that happens with the mural should be separate to a shop front scheme.

Grants wise, you are looking at council money such as the New Homes bonus or section 106 money and a willing council to bid for the funds. It’s been my experience that local councillors haven’t been willing to bid for the funds as the council wants the funds to go to Catford and other places.

The other place you could look for funding is Spacehive: 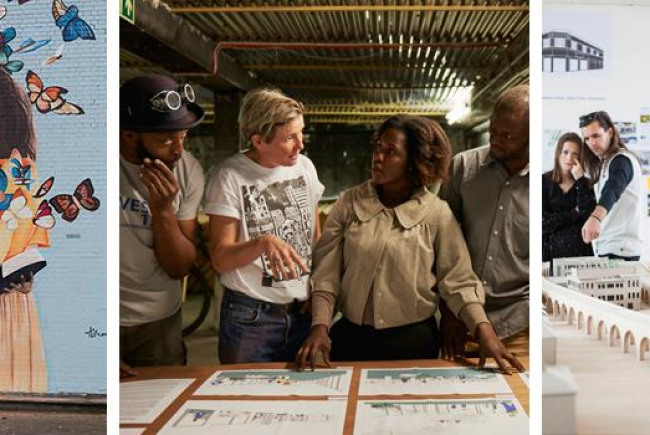 
You can bid for up to 50k for projects, but that won’t go that far with shop fronts. And if the funding comes from grants, the costs go up as you have advertising consent, companies often have to be VAT registered or have the proper insurances etc and you have to get numerous quotes. I’ve worked on schemes that were 50k for one shop down to simple signwriting for a few hundred.

As for empty shops and advertising, I totally agree with Joanne that it’s far better to do up a shop front and put something nice in the window to advertise the space rather than the huge triangle of plastic that is normally used. However, this relies on an enlightened company. We have done this in a few spaces around London and once again it’s a lot of work getting people to agree. The horrible boards that are put up on bits of wood cost around £15-20 to install and it’s easy for estate agents to do it. Anything outside of the norm means gettting permission and is hassle and more expense. The likes of the Dulwich estate think differently, but commercial agents, sadly, don’t.

So if anyone does go into this, go in with your eyes open. Set your targets low and don’t expect to change the world. I was really surprised when I started doing this over 7 years ago now at how difficult it can be. It is a huge amount of, often thankless work which is often criticised by people who don’t understand what goes on behind the scenes.

That’s why I’m amazed at the work Jon has done so far.

If anyone wants an idea of how much shops fronts, awnings, awning recovers, shop front spraying, signage costs etc I can give some ballpark figures.

Some improvements would cost nothing: 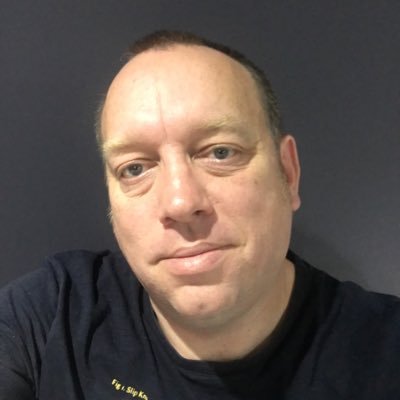 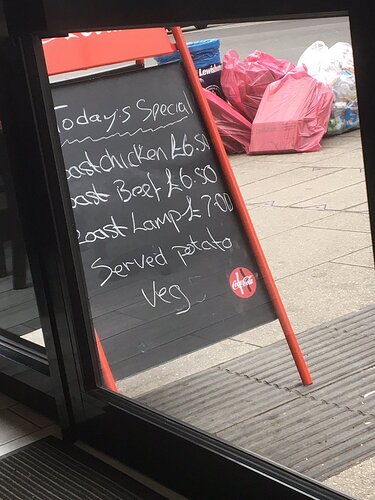 On a serious note, there are probably loads of small and inexpensive changes that can be made to improve the high street. What would you suggest to the council and to shopkeepers?

There’s some interesting precedent from near neighbours, such as Nunhead… for whom Southwark Council managed to get a grant of nearly £500k from a Mayoral fund. A big chunk of this went on restoring original shopfront features, new signs and shutters. Nunhead Lane (IMO) looks attractive as a result, and has seen a flourishing of interesting new independent businesses… 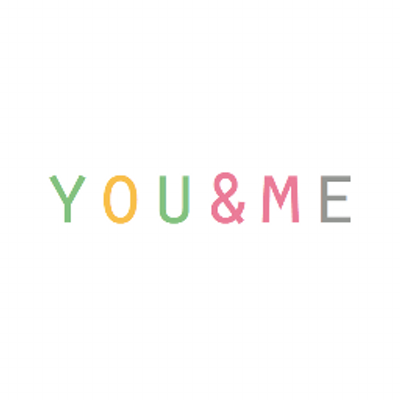 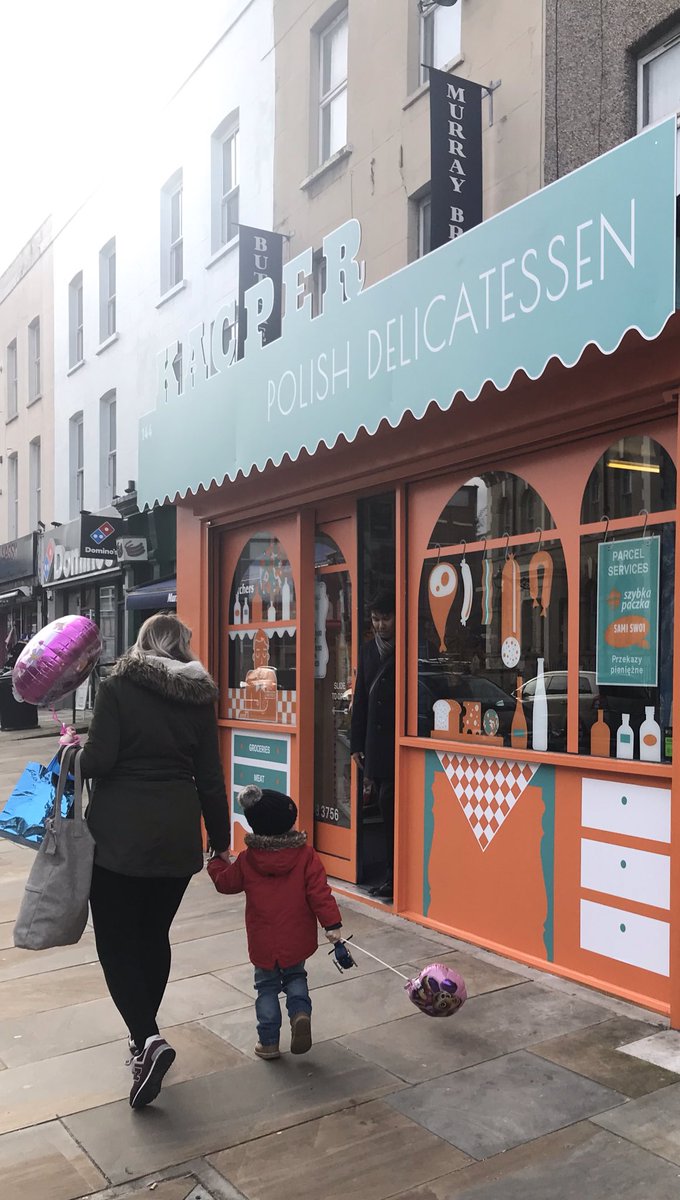 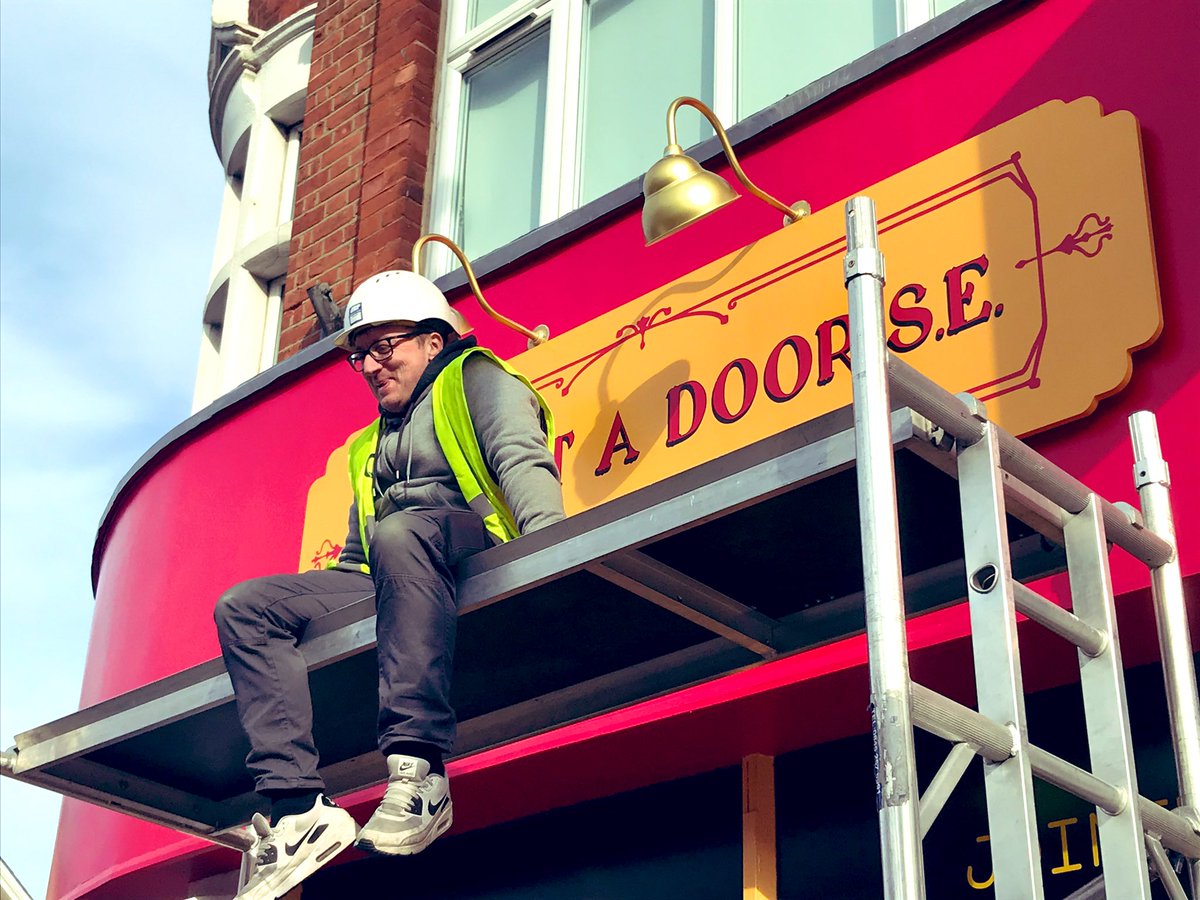 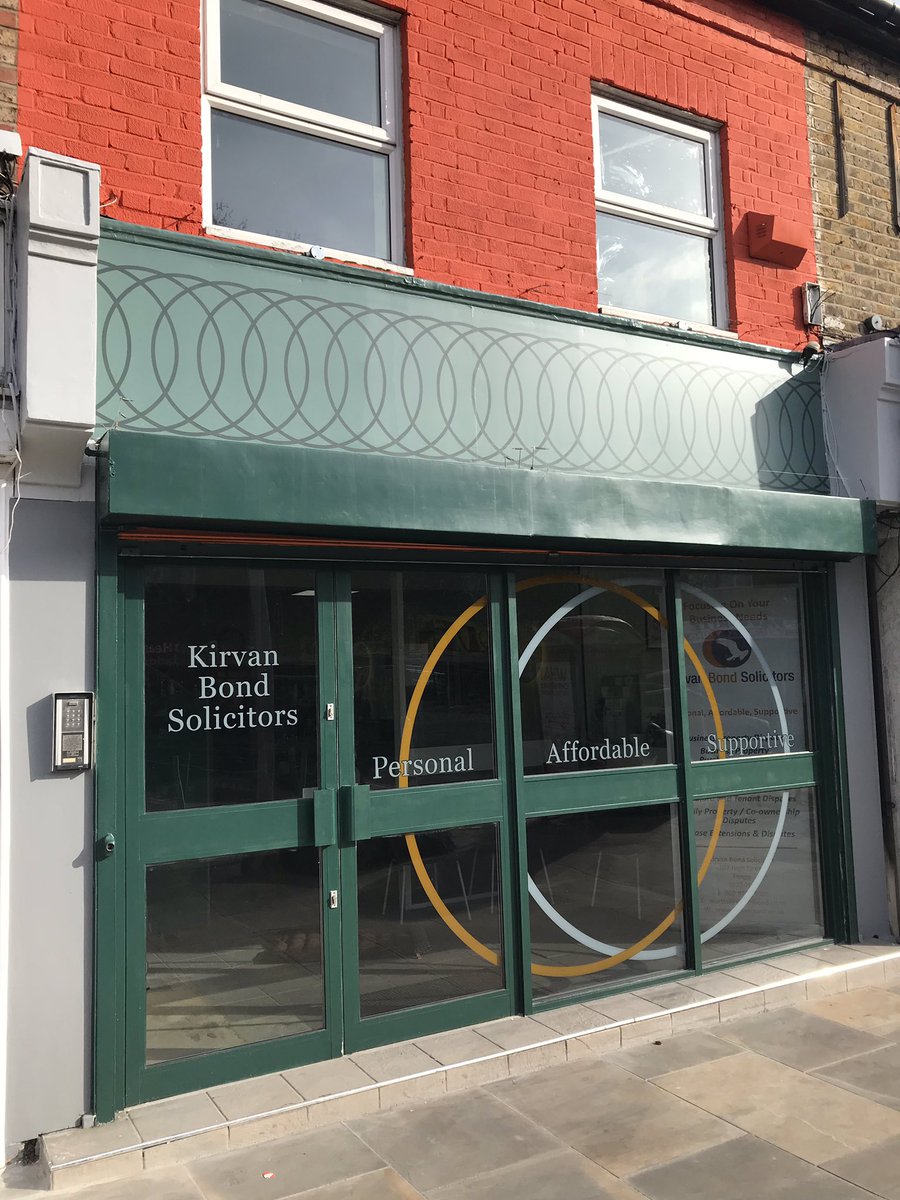 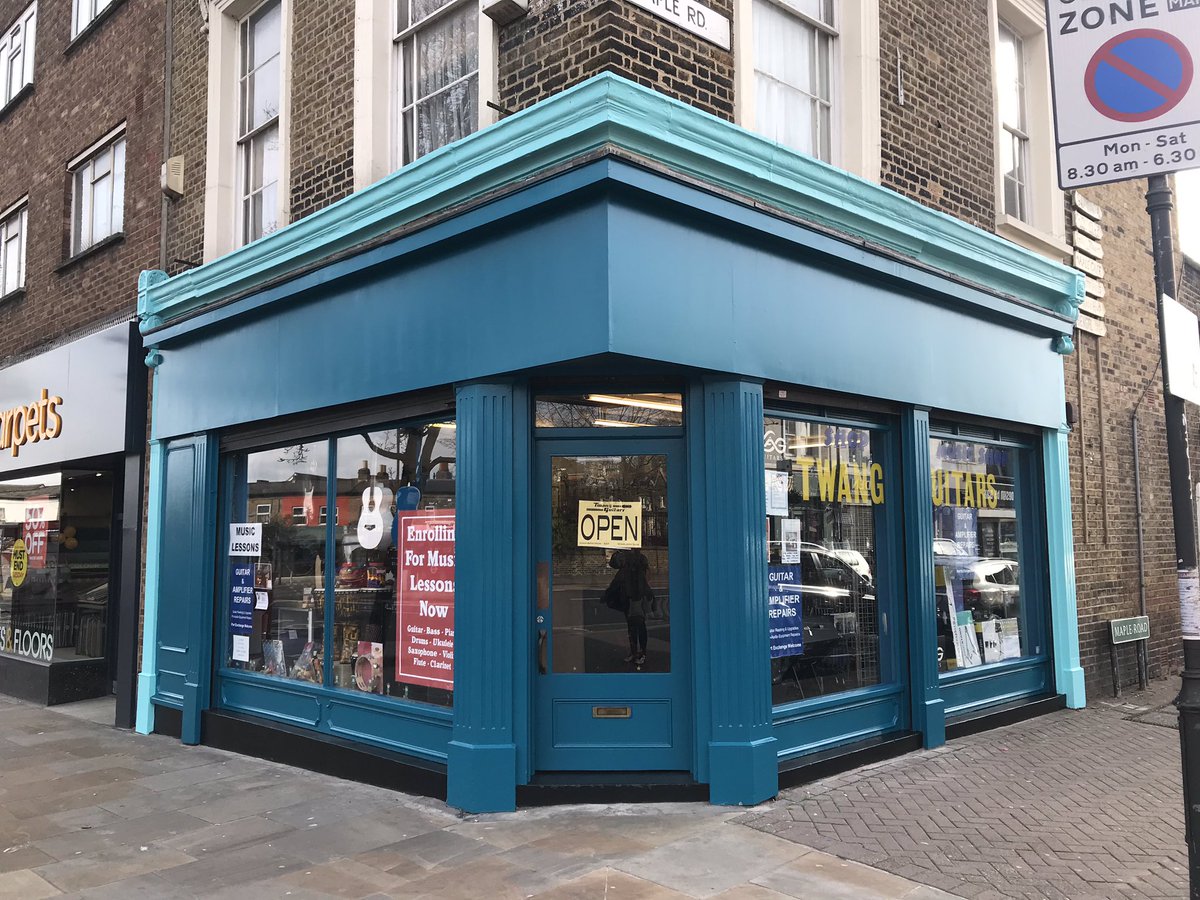 Just thought I’d add that although I don’t think anything has really been done with this type of thing of late, last year I send a long email to some of the councillors/people on the council/Sydenham society regarding this type of thing (although it was focussed on street art) and how they fit into Sydenham’s yearly aims as decided/discussed at the meeting:

E.g.: walking to work and seeing bright colours, lovely artwork etc rather than run down shopfronts/signs or deteriorated walls etc with dark colours and I assume some people may feel a place is safer if it looks nicer perhaps

-4. Clean and Green
e.g.: use of paint would automatically make areas feel cleaner 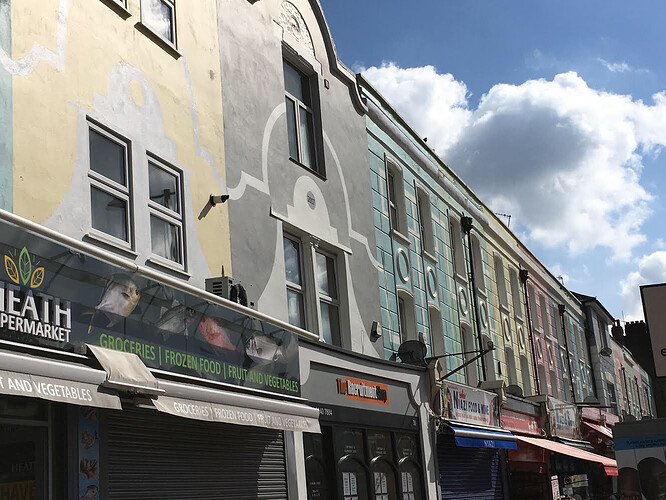 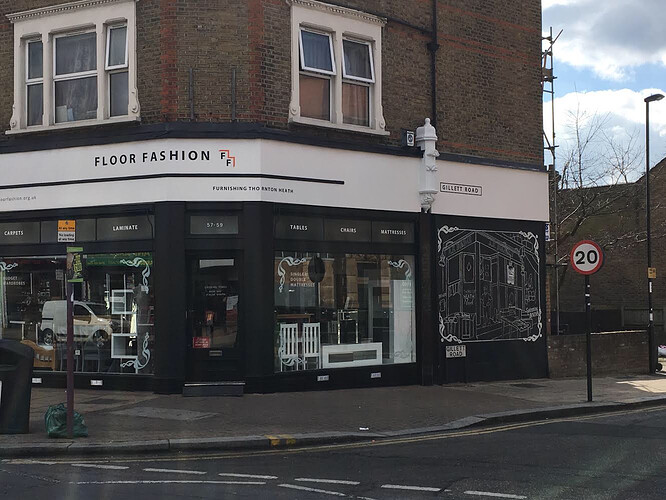 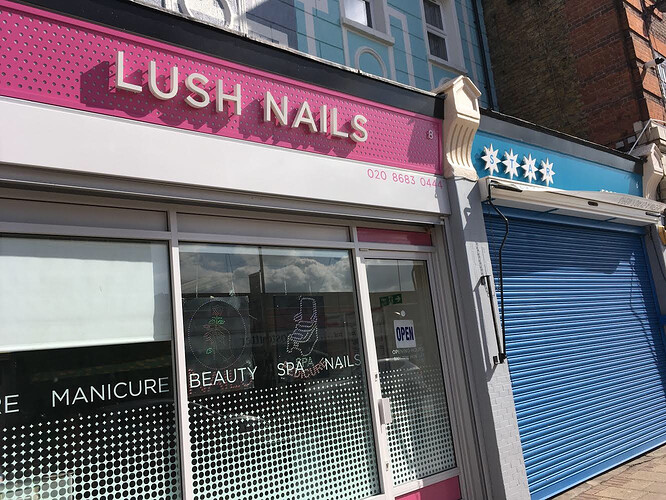 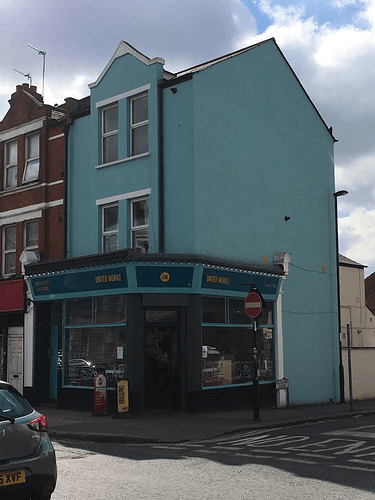 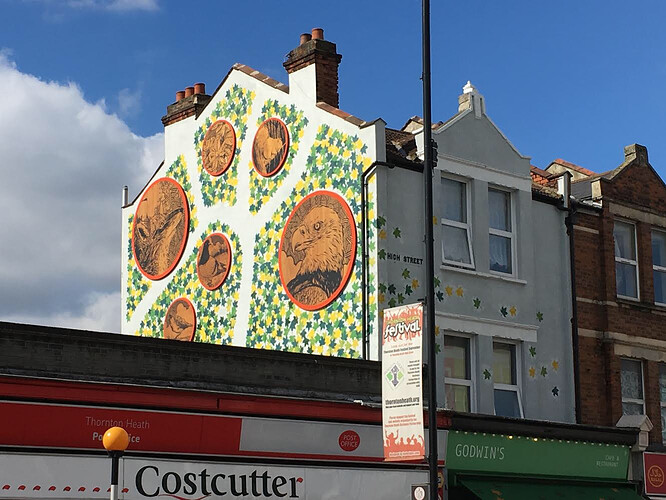 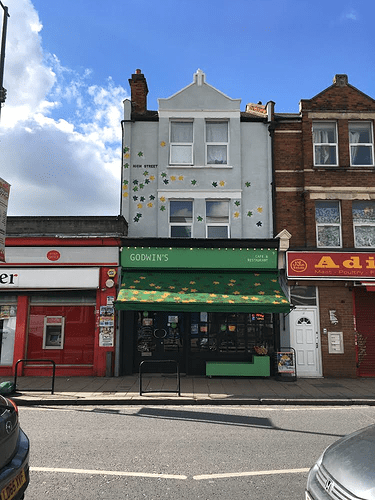 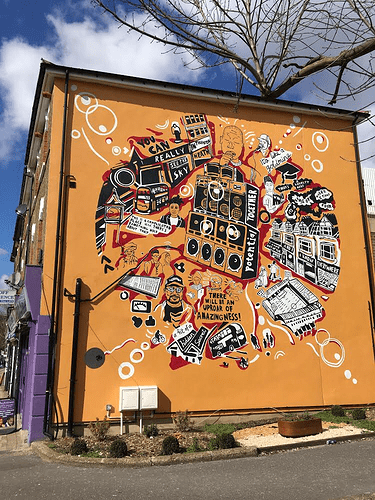 Wonder if more people sent emails/twitter and overloaded the council with the want for this type of thing (if people do want it) but more so how the “aims for the year” don’t really seem to bejng attended to and things like this perfectly fit with those aims it might push things a bit?!..

So why is penge different ? In that they manage to be able to gey nice storefronts ?

Unfortunately, the political will does not seem to exist in Sydenham, nor does the concern about what happens in the affluent parts of Sydenham necessarily translate to what happens i nt he poorer parts, -witness the posts on fly tipping. When i mentioned this on another forum, some one whom i know lives on Venner Road said “generally I find the street cleaning to be good!” and that we “need to stop talking our area down”. Check out the photos! So, why complain those of us in Bell Green, better that we are told what to think and accept our lot.