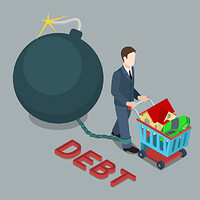 This means 30 per cent of council tax income being used to pay back these loan repayments, or £710 per person.

The average amount of council tax each London borough spends on debt repayments is 23 per cent, according to Debt Resistance UK.

LOBO loans have come under criticism from campaign groups, and inspired a Channel 4 Dispatches programme, because councils were locked into loans due to highly expensive break clauses.

The Dispatches programme estimated that banks made more than £1bn in upfront profits on local authority loans.

Lewisham Council has nine LOBO loans with a combined value of over £100m with another almost £80m in public works loans, in 2014/15.

Fanny Malinen, from Debt Resistance UK, said: “Residents are increasingly concerned about the impact of LOBO borrowing to their councils’ ability to meet their civic duties and provide the services people so urgently need.

“This is why we are supporting residents to use their legal right to object to this irrational spending councils have been lured into by banks and advisers.”

“Resident action at the local level will not be enough if Government and regulators don’t act to stop the profiteering.

“There’s already a severe crisis in local authority funding following central government cuts, resulting from bailing out many of the same banks that sold councils LOBOs.

“Instead of tackling the crisis, further deregulation of local authority finance is driving councils into the arms of private financiers and property speculators. The consequences will prove disastrous for the public purse.”

Absolutely crazy, and knowing Labour, there are unlikely to be any plans or effort to reduce the debt burden.