Great work by @ThorNogson and others: 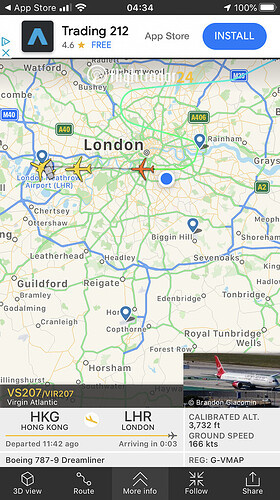 this morning it feels like the efforts of local community groups and the Forest Hill Society have been worthwhile. At yesterday’s meeting of their Consultative Committee London City Airport backed down and withdrew their proposal to end the weekend...

this morning it feels like the efforts of local community groups and the Forest Hill Society have been worthwhile. At yesterday’s meeting of their Consultative Committee London City Airport backed down and withdrew their proposal to end the weekend flight ban and to extend their operations at the beginning and end of the day. Thanks to everyone who wrote, responded, delivered leaflets under the flight path, sent a postcard, spoke to an MP.

Thanks are also due to local MPs Ellie Reeves and Janet Daby, plus several local Councillors including Leo Gibbons and Sophie McGeevor who all totally understood and supported our argument and have ensured that Lewisham residents have been properly represented.

We’ll never know what swung it, but we campaigners are declaring victory, they don’t come frequently. I am convinced that the public campaign including mass postcard campaign from HACAN , our XR demo last month at the London offices of the airport’s owners, the mass anti expansion campaign at Bristol (same owners) , plus our behind the scenes lobbying at the GLA, with Sadiq Khan’s advisors, with AM’s plus with quite a few MPs, and many Councils influenced a wave of anti expansion responses to their consultation from individuals, Borough Councils and MPs. We also lobbied the executives from their owning Canadian investors. And their planning authority, Newham. I don’t think they are ready to apply for expansion planning permission to Newham now. Looks a bit toxic publicly after the Heathrow supreme court and Bristol council decisions, even if they are appealed.

Obviously the air industry is in disarray right now- so, having flown their expansion kite, its not a bad time for them to put expansion plans on a shelf for a while, whilst appearing to have listened to feedback.

For the first time yesterday I thought the CEO appeared as though he understands what the London opposition is about. (He’s under enormous pressure to deliver value to the overseas shareholders who paid £2billion for the Airport). Instead, I picked up yesterday that they plan to differentiate themselves by becoming the leading world airport on use of green (hmm…) fuel and electric/hybrid planes. New strategy. They will publish their new Masterplan by end of the month.

Next week we will press on with the launch to MPs in Westminster of an independent economic report that will closely examine the economic claims that City made in their draft plan.

Where it leaves us is where we were when City launched the expansive draft plan last summer. That is with noisy overlapping flight paths over SE London with Heathrow, and still City have permission to increase flight movements over the present day level within existing planning permissions. The line that we took last year is still a good one - that no expansion should be even considered until such time as the overlapping flight paths over London have been satisfactorily sorted out.

So with the immediate threat of new Heathrow and City expansion at least delayed for a couple of years, local focus moves to ensuring that the Airspace Modernisation (= sort out the flight paths) project, delivery due 2025/26 involves close cooperation between the two airports, with a view to improving the double/simultaneous overflights of SE London, and increasing the altitude of planes from both before their final approaches. The Forest Hill Society is engaged with periodic stakeholder workshops at both airports pushing them to work together and not lose focus on SE London as they push their two projects along