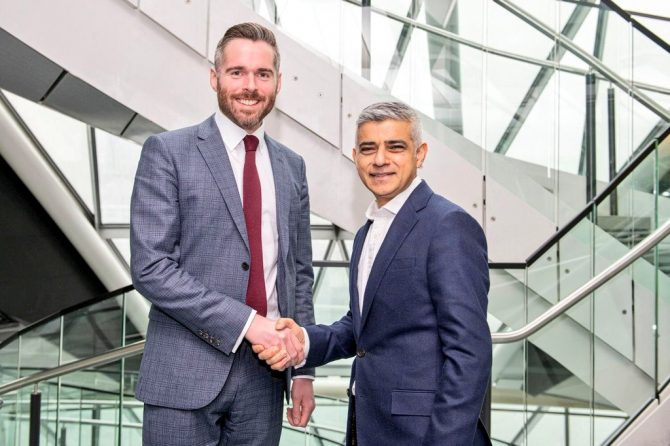 The Mayor of London, Sadiq Khan, has announced that Tom Copley has been appointed as his new Deputy Mayor for Housing and Residential Development.

He will succeed James Murray, who recently left the post to stand as a Member of Parliament.

As both a councillor in Lewisham and a London Assembly Member, Copley has built a reputation campaigning for all Londoners to have access to safe and secure housing across the capital.

As reported by 24housing , this included urging a ban on advertisements that encourage landlords to flout the 90-day annual limit for short-term lettings in London.

Copley has also been vocal in campaigning to increase the rights of tenants in the private-rented sector – including making the case for rent controls and ‘open-ended’ tenancies.

Copley has published a number of reports into various aspects of housing in London, including Right to Buy: Wrong for London, which revealed the scale of the shift of former council homes sold under Right To Buy into the private-rented sector; and Slums of the Future, which investigated the poor-quality housing created through the government’s office to residential permitted development rights.

Prior to serving on the Assembly, Copley worked for Hope Not Hate – an anti-fascist charity that works with communities to fight racism and hatred.

He is also a campaigner for the rights of LGBTQ+ Londoners.

Mayor of London Sadiq Khan said: “I’m looking forward to Tom joining our team in the vital role of Deputy Mayor for Housing.

“As chair of the Assembly Housing committee, Tom has become a leading voice in housing policy across the UK, and has rightly earned his reputation as a relentless campaigner for the rights of council tenants and those renting in the private-rented sector.

“We’ve begun making progress fixing the housing crisis in London, including starting the highest number of new council homes in the capital in 34 years.

“But I know that Tom shares my ambition to go even further, working with all levels of government to solve the housing crisis in London once and for all.”

Copley said: “I’m delighted to have been asked by Sadiq Khan to take up the role of Deputy Mayor for Housing. Since the Mayor was elected in 2016, City Hall has taken a much more ambitious approach to tackling the housing crisis, including directly funding council housing for the first time.

“I look forward to building on that work in order to deliver the genuinely affordable homes that Londoners need.

“The housing and homelessness crisis is one of the biggest challenges facing our city. Our goal should be a city where everyone has access to a decent home that they can afford.

“I will work together with London’s councils, housing associations, homelessness charities, and housing campaigners towards achieving that goal.”

Conservative MP, Andrew Boff AM added: “I warmly congratulate my friend Tom Copley on his appointment as Deputy Mayor for Housing.

“I sincerely hope that Tom will use the dying days of Sadiq Khan’s mayoralty to right some of the profound wrongs which have occurred on this Mayor’s watch.

“Tom should put an end to this Mayor’s penchant for fiddling the housing figures while reversing the deeply flawed move to entirely remove a family-sized homes target.

“He desperately needs to look at removing some of the ridiculous restrictions which prevent development on brownfield land while accelerating the glacial progress that has been made on the number of housing starts over the past four years.

“Tom’s predecessor used this incredibly important position as a steppingstone to Parliament while failing to bring about any real, positive change. The millions of Londoners who are crying out for new homes will be expecting Tom to take a very different approach to the role”.

“Congratulations to Tom on his appointment. Boroughs look forward to working with him on addressing London’s key housing challenges – including tackling homelessness, delivering more affordable homes, and strengthening regulation of the short-term lets market”, said a London Councils spokesperson.

Copley’s start date will be announced shortly, but will follow him stepping down as a Lewisham Borough councillor and London Assembly Member.