At 1.10 pm today Mon 7th Oct catalytic converter thieves were seen in the act of jacking up my car, which had been parked in Hassocks Close. We interrupted them and they drove off but have broken the catalytic converter and done God knows what other damage.

There were 3 thieves and they were driving a pale blue Vauxhall registration number PX56 GFV. They drove off at considerable speed up Kirkdale towards Sydenham Hill or Thorpewood Avenue.

Sorry to hear this @marymck but pleased you manage to record the number plate. Let’s hope the police can act on this.

Another local catalytic converter theft was reported on July 31st in Devonshire Road. 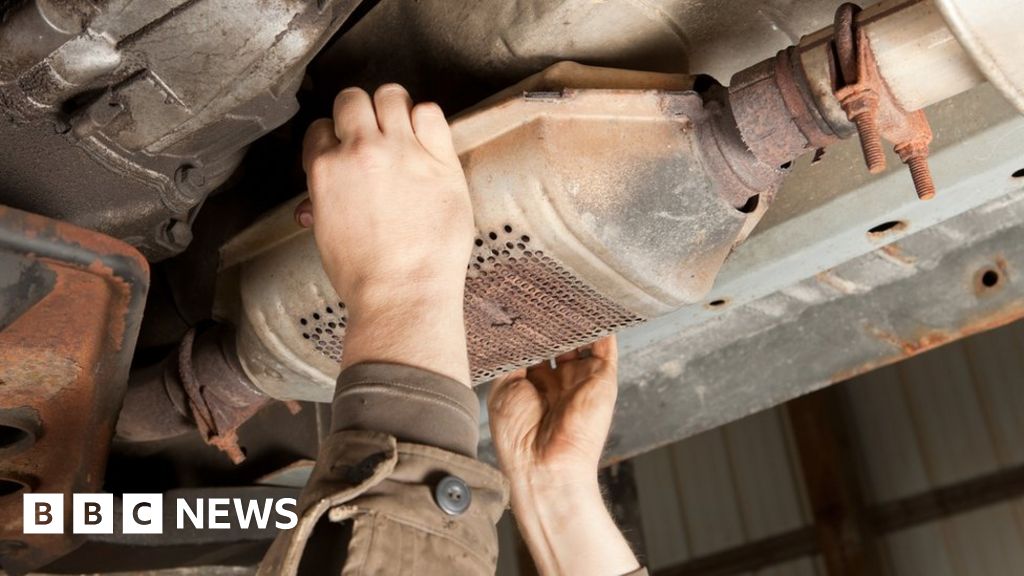 In a car’s exhaust system, catalytic converters clean up harmful gases before they exit the exhaust pipe.

In a video seen by the BBC, a criminal gang stole a catalytic converter in under three minutes in broad daylight.

The prices of certain precious metals have skyrocketed in the last 18 months - palladium is now worth £1,300/oz, while rhodium goes for £4,000/oz, according to FJ Church and Sons, a specialist metals merchant that is also the UK’s largest specialist in recycling catalytic converters.

The police urged vehicle owners “to be vigilant” and consider taking safety measures to protect their cars.

How the theft works

A catalytic converter is located in a box on the exhaust pipe under a car. In order to steal it, thieves slide under the car and use high-powered cutting tools to detach the box from the pipes around it. 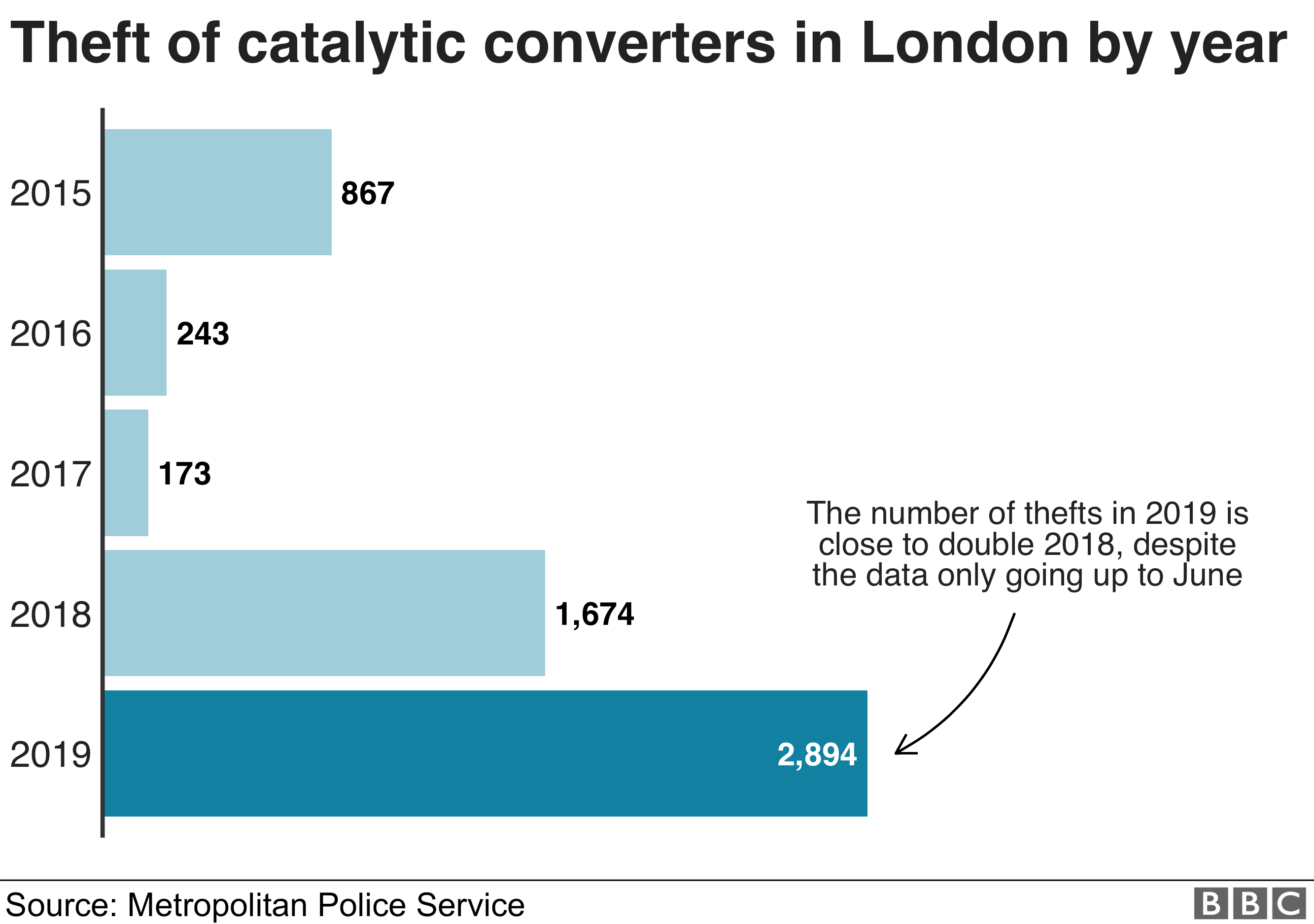 Although there are 10,000 different types of converters, the cars that are most often targeted are hybrid vehicles.

Since hybrid cars have two power sources - electric and petrol or diesel - the catalytic converter is used less frequently to process pollutants. The metals are less likely to corrode, meaning they are worth more and thus attractive to thieves.

Precious metals must be used because the converters have to work efficiently enough to meet emissions standards.

What can we do about it?

The police has advised that vehicle owners consider taking the following safety measures:

Carmaker Toyota is very concerned about the thefts, and says it is “doing all [it] can” to support its customers who have been victims of crime.

Besides consulting with the police and offering customers safety tips, Toyota has developed “Catloc”, a device which makes it harder for thieves to detach the catalytic converter from the bottom of the car.

“Although ‘cat theft’ is not new, or limited to Toyota products, it has always been comparatively rare; however, the recent rise in the value of such parts for recycling has meant that police forces have seen a very significant rise in these offences in the last few months,” said a Toyota spokesman.

Toyota does not make money when replacing stolen catalytic converters in cars, and it is also bearing the cost to discount the Catloc device for its customers, while it researches more anti-theft technologies, the BBC understands.

Honda has a different take on the matter - it says that Honda Accord and Jazz models from 2008 onwards come with a tray under the car to make it harder for thieves to get at the catalytic converter.

And in car models from 2015 onwards, the catalytic converter has been placed within the engine bay, so a thief would need to disassemble the car to get at it.

Cracking down on scrap metal yards

Dafydd Dylan, commercial manager of the catalytic converters division at FJ Church and Sons, told the BBC that his firm is constantly receiving calls from members of the public asking how much they could get if they were to sell catalytic converters from car models such as Totoya Prius, Honda Accord and Honda Jazz.

“We do what we can to discourage it - we don’t purchase any units from these models unless they come from a reputable dealer,” he said.

He added that there were also ways to tell if suppliers were trying to sell stolen goods: "When we get a packet, usually there will be a range of low-end and high-end catalytic converters in it.

“We have refused to work with some suppliers for certain packets containing a disproportionate amount of high-grade scrap converters.” 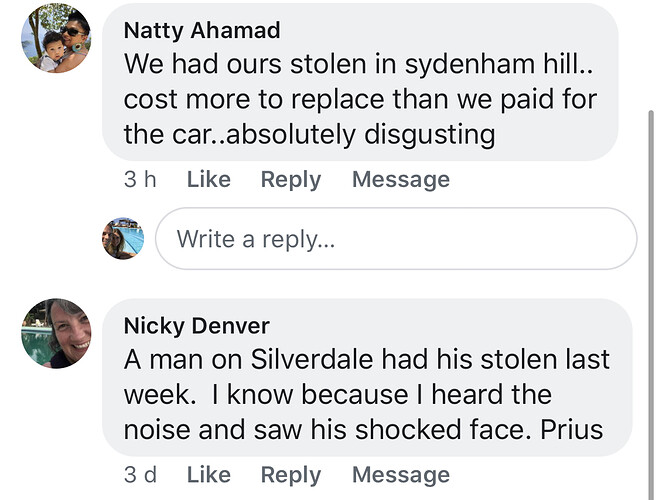 My catalytic converter was stolen last week in Wiverton Road, I have CCTV of the thieves, it was on Sunday 3rd Nov, 1pm in the afternoon. The Police are keen to see the CCTV and also any other info from other people that have also had the same thing happen to them. Please contact me asap and I will forward on the info to the Police. These scumbags need to be stopped, they have got away with it for too long and if all the info comes together we must surely be able to help the Police enough to catch them

Hi Claire I will dig out the details of the officer who dealt with my case and I’ll PM you. Does it look like the same car?

Here’s a video of a theft in London this year:

Broad daylight, with people all around. So incredibly brazen. 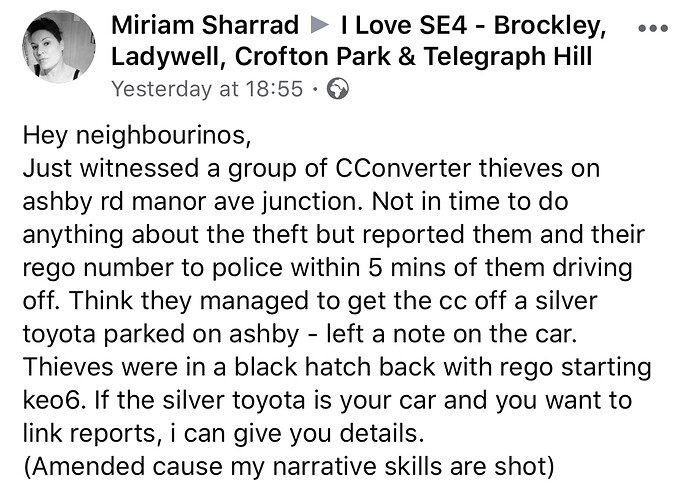