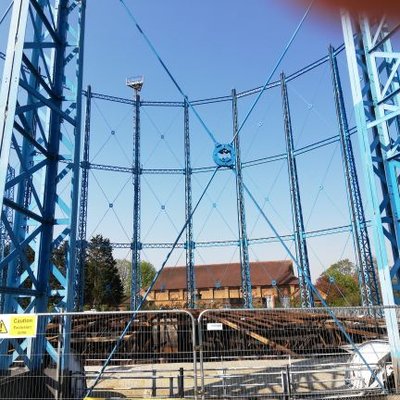 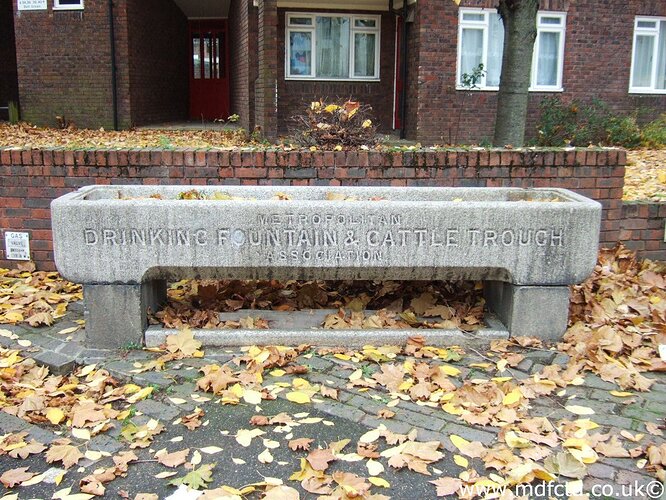 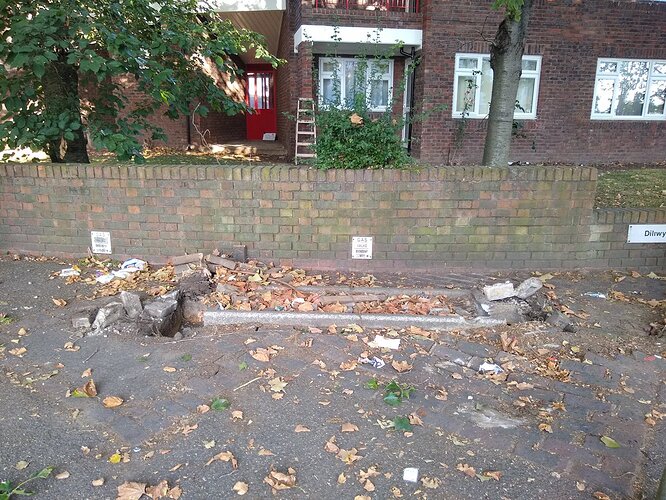 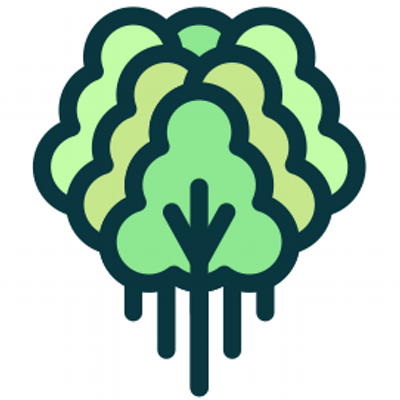 This 100+ old horse trough has suddenly disappeared from Green Lane. Apparently a similar one vanished at Bell Green in Sydenham a week ago. Very sad, these are historic artefacts; daily reminders from a bygone age. https://t.co/o4jLl0iy7V 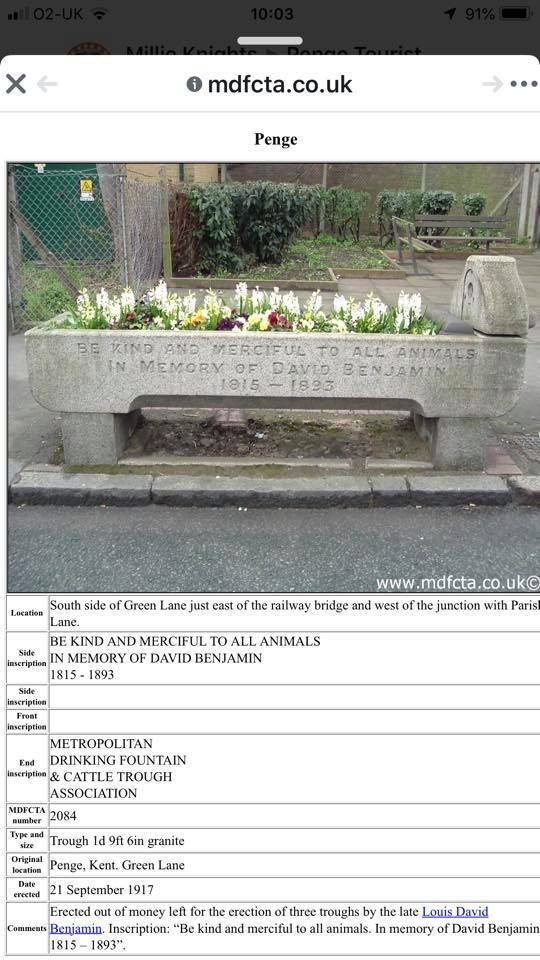 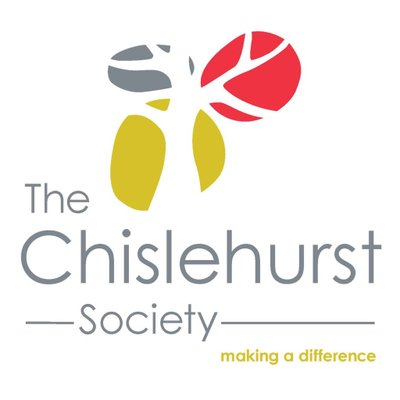 Appeal: The old stone horse trough by the Post Box on Kemnal Road has been stolen. Historic troughs have been stolen in other parts of SE London. Please be vigilant & report any suspicious behaviour. #ChislehurstSociety #Chislehurst #WeLoveChislehurst #Community @VisitChis twitter.com/se26life/statu…

Bromley Council and police have been notified by Millie Knights. Christopher O’Shaughnessy has notified Crime Watch Roadshow. I have notified the National Trust; Royal Horticultural Society; The Society for the Protection of Ancient Buildings; The Victorian Society; Transport for London, who can’t help because it is not on a red route but still tried to help as much as possible; Salvoweb, who have kindly made the stolen ad into a priority one, for free and sent it out on their newsletter; Newshopper, who have kindly done an article; The Antiques Trade Gazette, who did the article posted above and two more email addresses at Bromley Council today, I only sent it today, I would like to make contact with the Bromley conservation officer. The owner of the Metropolitan Drinking Fountain and Cattle Trough Association website, who took off all the information on his website so it couldn’t be used by the thieves, has linked me up with two of the people who reported the Bell Green trough theft and the conservation officer for Lewisham.

Any information or ideas would be welcome.

Baffling and upsetting. One wonders what these criminals might steal next. War memorials? Statues?

It is sadly unlikely that these artifacts will appear on public antique listings. More likely: they will have been stolen to order by organised criminals with the kind of resources it takes to physically remove these items. 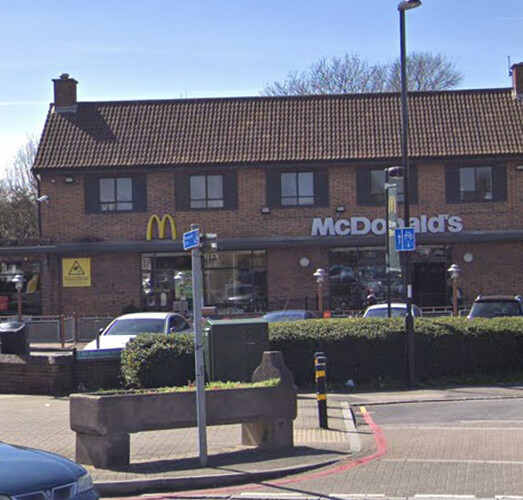 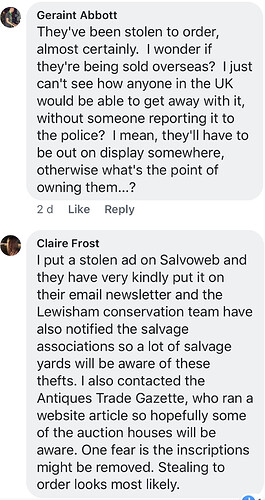 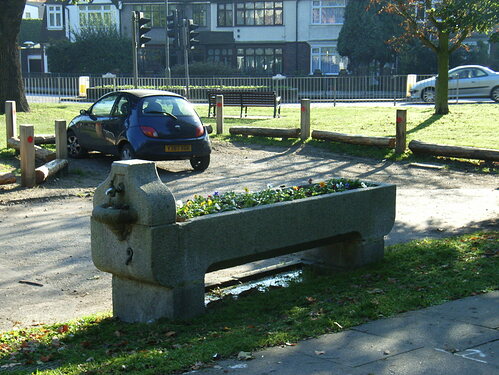 Water%20trough%20at%20Widmore%20Green%2020061280×960 294 KB
This one was actually a Grade II listed structure; doesn’t help its protection but at least there is a detailed description: It’s incribed with the words ‘METROPOLITAN DRINKING FOUNTAIN AND CATTLE TROUGH ASSOCIATION.’ It has a drinking fountain with bowl at one end and dog trough below. Police and Council have been informed.

The Listing also means it’s classed as a “Heritage Crime”, so should see the police response and any penalties escalated.

Very sadly this has just been reported near me in Kent as well: 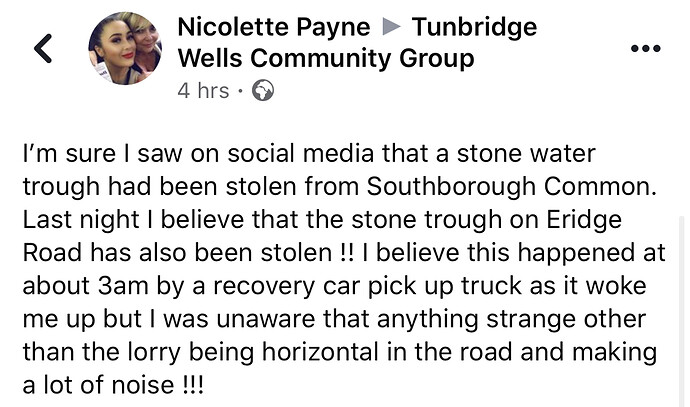 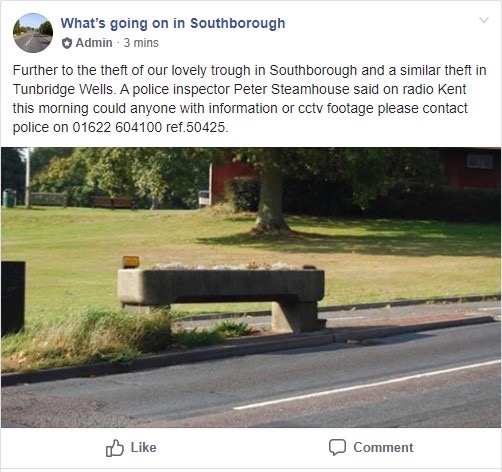 An article from December:

A further two Victorian animal troughs have been stolen in south London, following four that went missing in September. One of the six missing troughs awas taken from Coombe Lane. The inscription on one side reads ‘Metropolitan Drinking Fountain & Cattle Trough Association’. The trough in Widmore Green.

Locals have been calling for help in stopping the crimewave.

The six missing troughs are from Penge, Bell Green, Downham and Chislehurst with the latest two taken from Coombe Lane and Widmore Green.

Coombe Lane local Terence Meredith, who tends the Coombe Wood Garden and plants in the Coombe Lane trough, said: “It was a solid granite trough so weighed a great deal. These thieves are well prepared and have a market somewhere for them. I fear for the half dozen other troughs in the borough.”

The Widmore Green trough was stolen on the night of November 16/17. This trough has Metropolitan Drinking Fountain & Cattle Trough Association inscribed on both sides.

The Coombe Lane trough also has the Metropolitan Drinking Fountain & Cattle Trough Association inscription, but only on one side. On the back it is engraved with The gift of James Spurrier Wright 1889 . Residents’ associations, councils and the Metropolitan Drinking Fountain and Cattle Trough Association have called for help to try to trace the stolen items.

The thefts have been reported to the police, local councils, English Heritage, The Society for the Protection of Ancient Buildings, The Royal Horticultural Society, The National Trust and The Art Loss Register, and various media have been alerted.

Historian Alan Underwood has catalogued and created a database of many of the community troughs and has been helping in collating information about the thefts.

The previous thefts of the troughs were reported in Antiques Trade Gazette.