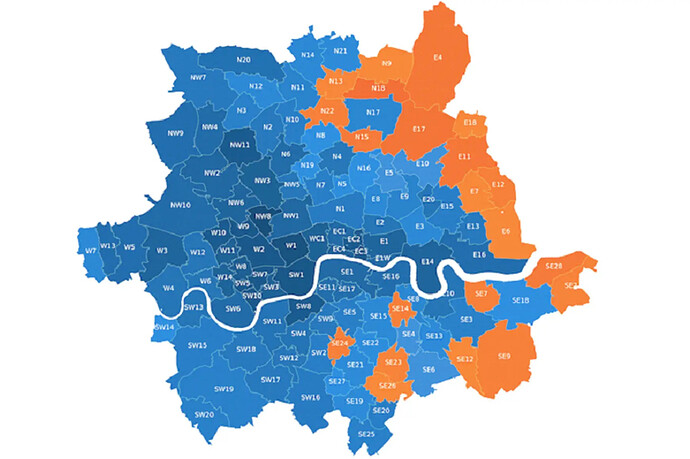 Exclusive new analysis has identified the 10 “hottest” markets in the capital, dominated by parts of north and east London.

Britain’s chaotic exit from Europe has resulted in a stalled housing market with prices falling at the fastest rate in six years — but there is still a key swathe of the capital where homes are selling strongly.

According to the Royal Institution of Chartered Surveyors the number of buyer enquiries, agreed sales and new instructions are all on the wane across the UK, while the Land Registry reports prices in London falling 0.7 per cent year on year, making it the only region of the UK to have suffered an annual average price decline.

But in exclusive new analysis of the number of homes on sale in every London borough compared to the number which are either sold subject to contract or under offer, online property market analyst PropCast has identified the 10 “hottest” markets in the capital, dominated by parts of north and east London.

Where are London’s hottest property markets for 2019?

In the lead is Edmonton N18 , where relatively low prices, a multibillion-pound regeneration project taking shape at nearby Meridian Water, plus good Overground commuter trains, with services from Silver Street to Liverpool Street taking just under half an hour, are inspiring buyers to take the plunge despite Brexit.

Other winners identified by PropCast include an east London cluster of Walthamstow E17 , Wanstead E11 and Chingford E4 , as well as Seven Sisters and South Tottenham in N15 . Almost all are seeing price increases.

Walthamstow is the only “hot market” slightly bucking the trend with prices dipping marginally from an average of £490,000 to £488,000, despite huge demand.

Gavin Brazg, founder of PropCast, says 17 per cent of London’s postcodes can still be considered sellers’ markets, where homes are selling strongly.

“Homeowners here have it easier as the balance of power is skewed in their favour,” he says. “Properties sell quicker and often after a bidding war — as long as the initial asking price is set realistically.”

Buyers in “cold” zones need to be even more realistic about pricing, he says. “The key to success is to identify the homes that are your direct competitors, and then position your home so it represents the best value for money.”